I'm having a hard-enough time trying to find out where my GGG-Grandfather James Smith came from to Grenada (late 1790s), and now I'm told that I must now go back at least another 170,000 years earlier than the experts thought... 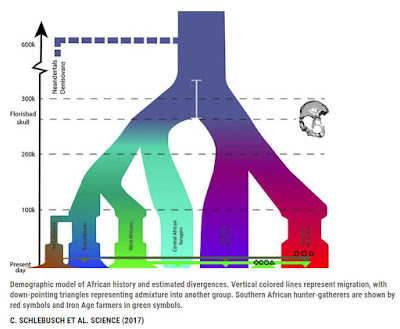 And 23andMe states that I have 297 Neanderthal variants. This is more than 79% of 23andMe recorded customers.

I just got the go-ahead to post our story regarding our 149th quilt, Lee Miller. This was another different experience for Andy and me.


Lee Miller was one of our quilts selected to be a part of the collection of a current and upcoming traveling collection called HERstory. It is a collection of quilts, honoring women of strength and note, celebrating honoring the 100th Anniversary of Women receiving the ability and power to vote. Thank you, Susanne Miller Jones, for your insight and accepting Andy and I to be a part of this

On September 26th The Atlantic published an article by Krishnadev Calamur “How many Refugees Will Trump Let In? The administration’s limit could be a new low."

That number is not only lower than the 50,000 the nine nonprofit groups that help resettle refugees in the U.S. had expected based on the president’s budget proposal, it’s far lower than the 75,000 refugees they had hoped to convince Trump to admit in the coming year. The number would be the lowest refugee cap announced since President Reagan signed the Refugee Act in 1980.

But I do have a question. The inhabitants of Puerto Rico are Americans. The current population of Puerto Rico as of September 28th, based on United Nations estimates is over 3.6 million people. And?

Hurricane Maria has smashed and physically obliterated that American territory. It should be a no-brainer that the current White House Administration openly accept the possible influx of Americans from Puerto Rico. And?