I guess I must spruce up with the pending two tourists who are thumbing a ride on Space X. I guess I can wave while the fly by. And I have now completed 46.8% of the distance to my next destination and goal point. On this 1,300 day of cycling, I have pedaled 2,763.8 miles on Mars on the virtual part of my journey.

Per The Atlantic and Adrienne LaFrance (Feb. 27, 2017) – “How Does Donald Trump Think His War on the Press Will End?

“American presidents have often clashed with the press. But for a long time, the chief executive had little choice but to interact with journalists anyway…But to understand Donald Trump’s war on the press, you have to consider what has happened to American journalism since August 6, 1991, the day the first website launched. With that first website, the thick layer of mediation that once existed between the president and the masses began to evaporate…Trump is a master provocateur, perhaps because he has a reputation for being thin-skinned himself. He knows how to needle people. He knows which buttons to push. It’s why people adore him and despise him, because he knows how to get to them. He seems to have intuited that journalists, who believe deeply about the importance of their own work, will leap to defend the significance of what they do. Journalists writing about their own indispensability run the risk of underscoring the perception that they are elite, privileged, and somehow separate from “the people.” 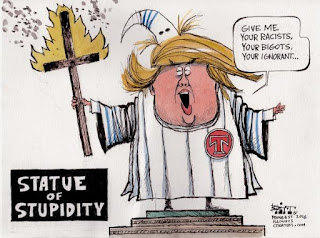