This morning on my Schwinn 150 I cycled 20.5 miles. I am now located on the Mt. Hood Highway just west of Mt. Hood and the community of Rhododendron, Oregon. I am headed in a south westerly direction to my next Interlake location which is about 895 miles away. 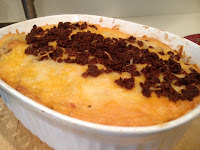 Let’s face facts. I’m definitely not trying to lose any points on the weight scale when I made my variation on a Paula Deen’s Potato Casserole. But first I have to say that this thing was damn good… really good.

Here’s what I did. First layer – Left over Chicken Pot Pie Croquettes, from the night before. Second layer – Sour cream. Third layer – Fried onions and green peppers. Fourth, fifth, sixth, and seventh layers – Thinly sliced potatoes. Eighth layer- Butter… and butter. Ninth layer – Cheddar cheese, a lot. Tenth layer – Fried and crumbled Chorizo sausage. All baked, then served with homemade hot sauce. Okay, okay, it was good, and my blood sugar was up to 117 this morning. But I truly, truly enjoyed pigging out. Must have been my need for carbs after starting back on my Schwinn 150.

Orange Is The New Black on Netflix… This new series is about a woman, Piper Chapman, who starts serving a 15-month sentence in prison for having been convicted of being a money mule. The series is based on Orange Is The New Black by Piper Kerman, a memoir about her own experiences in prison. Not bad, but I keep thinking that Orange is the new female version of the 1997 HBO series Oz.

Today work continues on our Sea Foam afghan and our Blumish Two guilt.

Be healthy and enjoy. I’m headed onward to Tampa.