This morning I cycled on my Schwinn 150 21.1 miles. I passed by the whole of Eagle Lake and I am headed southwest on California 139. I believe the next City along my virtual trek is Susanville, formerly known as Rooptown.

The drone of the fans, the dryers, and the dehumidifiers continue on, and on, and on. The beginnings of the cupboards are emptied and the house is beginning to take on a setting for the reality show Hoarders.

I am just waiting for an olive branch.

And so I take The Pack outside for their morning p-break hoping that I can escape the consistent whir of the fans. Oh and I forgot, it is Saturday. It is the usual day of the week that the majority of neighbors are working on their lawns and yards. The buzz and hum of motors is horrendous. I cannot escape. I need some ear plugs. I need a small cabin in the wilds, on some mountain, without any power, electricity, or gas. I NEED SILENCE!!!

Flooding and frustration is causing me to eat and my blood sugar and my weight are gradually increasing. Need to focus on sensible eating this next week. Got to drop my blood sugar down by 30 points. I want to continue to avoid the diabetes meds. 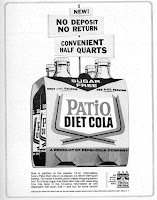 Mad Men, Season 3, Episode 2 – I learned that Diet Pepsi was originally named Patio. Why would you ever name a soda Patio? And as I am watching both Mad Men and The West Wing, concurrently, it is sort of strange and somewhat mind-boggling keeping track of which serial is which. In the 1960s of Mad Men the actress Elizabeth Moss plays Peggy Olson.  In The West Wing she plays the teenage Zoey Bartlet, the President's daughter.  Mad Men is a more recent creation than The West Wing, which is set 30+ years later in 1999 to the 2000s.  I have to compartmentalize my brain.

Our Blumish Two is back on the Rack. It is now in the throes of the final runs of quilting. Sea Foam afghan has increased in length again. My goal is to complete the inner top this weekend.