This morning I am located on Jefferson Boulevard and I am headed in a southernly direction. I’m getting close to Pumphouse Road.

Today I cycled 21.3 miles on my Schwinn 150 through North Natomas and the three divisions of Sacramento: North, the City, and Southwestern. 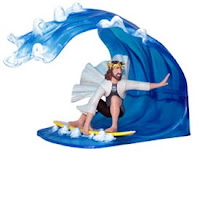 Cowabunga and praise the Lord. Truthfully, who would actually buy this? I must be living in another plane and dimension when I found this on Amazon.com as offered by four merchants. You can have this for a mere $40.00 plus s&h. I think the sculptor got something mixed up with an interpretation of Mathew 14:25… All I can hear now are The Beach Boys and “Bom Bom Dit Di Dit Dip… We’re going surfin’.” And because the statue is wearing a crown of thrones… the artist’s understanding must be that a risen Jesus must have taken some time out to catch a wave. A mind is a terrible thing to waste…

Last night I tried something for the first time… Enchiladas. And no, I do not mean that it was the first time to eat enchiladas, but it was my first time to construct and cook them. For all time, I have sort of avoided cooking Mexican, (excepting microwave Nachos), and avoided Sushi recipes, just because. But this time I thought what the hell? What could I lose? And actually, of all the cooking experts out there right now Rick Bayless is sort of my culinary mentor.

Yesterday I had to make a quick stop at the grocery store. Well I started with a can of Old El Paso Medium Enchilada Sauce which I picked up at one of the local Publixes. There is a pretty easy recipe on the can, and I thought why not? Only thing was that there are only four ingredients listed, including the 6-inch flour tortillas.  I thought that this recipe sound pretty basic and boring. After I added a few things and followed my own drummer it turned out quite well and my blood sugar ranged in this morning at 111. 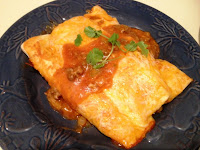 But guess what? I was asked to think about writing a cooking blog…and my response was well maybe. But there’s thousands, upon thousands of amateur cooks and wannabe chefs’ blogs and sites in InternetLand. But the right buttons were pushed. And then I thought, once again, why not? You’ll have to check out my new blog, Jim’s Gotta Eat. I have already begun the new construction and it will be up shortly.

My viewing pleasure on my Schwinn 150 was Mad Men… but last night while I was sewing in the ends of our Sea Foam Afghan I decided to watch a couple more of the following episodes. Everybody drinks, all the time in Mad Men. The story lines touch circumspectly on overindulgence and the alcohol issues. And just about everybody smokes. Lucky Strike is the firm’s biggest client.

Work continues on both our Blumish Two quilt and Sea Foam Afghan.