I am located, virtually via Google Maps, headed east on West Walnut Grove Road toward Blossom Road. I am on the road between Walnut Grove, population about 1,550, and Thornton, population 1,130, in California. I am also between the two Counties of Sacramento and San Joaquin.

My fasting blood sugar dropped again to 110.  It still is a wee bit up and my goal is to get it to drop another 20 points.  Without any of my diabetes meds I am still working it to bring my average fasting count lower.

I wasn't looking for this but when I found it I am a bit flabbergasted. This advertisement on Storenvy.com is also a wee bit confusing. (Storenvy is an online marketplace and store of thousands of indie, aka independent, merchants.) And I am just lost…which of course isn't anything new. The ad mentions seven Religion Rangers but shows and describes five. Also it is not clear whether the cost is $55.00 each or for the five shown or for all seven. I am so confused. 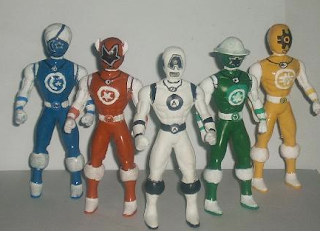 The religion Rangers at first is a group of seven colour-coded religious teenagers who assemble weekly to destroy anti-religious enemies deployed by their arch nemesis, Philistine Phil and his cohorts, heretic Herb and Blasphemy Barbera.

The Rangers are Employed by the floating head of Jesus, trapper in big painting, otherwise known as Jesus-face. Also his robot assistant, Halo-5, who is actually a dog wrapped in tinfoil.

Each ranger has a Religion weapon, a Religionzord and special superpower bestowed upon them by Jesus-face. The Religion Rangers group edition comes with their own Religion...

BEFORE ORDERING, PLEASE STATE WHAT RELIGION RANGER YOU WOULD LIKE TO PURCHASE PLEASE !!!

Not much more that I can say about Religion Rangers...

And yes I have started a new blog site, Jim's Gotta Eat. This is a challenge and a dared request.