My 20.1 miles completed on my Schwinn 150 and I am headed in a northwesterly direction on US-14 west towards Schultz Road. Farmland in Wisconsin… The next village on my Trek is Black Earth in Dane County, population as of 2010, 1,338 people. 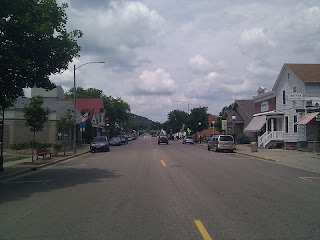 I have a question. Why does one become a vegetarian or vegan and then create simulated meat substitute? I mean does a created food stuff have to be "labeled" or "perceived" as a meat substitute instead of allowed to stand on its own? Why does not a recipe present itself for its own benefits without the excuse that it is "meatless"? Why aren't "meatless meatballs" called "vegieballs" or "veganballs"?

And while I'm on my soapbox, what the hell are "Kosher Shrimp"? And yes I know kosher shrimp are fake shrimp made from fake krab.

The Tudors – Wosley and Buckingham against Henry and Moore against Wosley and Henry rallies against Boleyn and Buckingham… And Henry wrestles Francis whilst Wosley sets the stage for Rome. I did NOT pick this to coincide with what is happening in Rome this week. Checkmate!