Well on this 107th day of my Trek Tampa got its 28% possibility of rain storms during the early hours of the morning. Since when are weather prognosticators able to predict the likelihood of rain within one degree? But on my Schwinn 150 I continue on my Trek within the protection of my roof and I keep out of the rain.

Today my 20.3 miles has me following the Wisconsin Minnesota state lines. I am on Riverview Drive, west of Lake Onalaska… (And I can see the Russians from my front porch.) My actual location is County Road 12 at Park Road. Total mileage 1,793.9.

I’ll be following the state line and the River to my next Interlake location for about 130 miles. 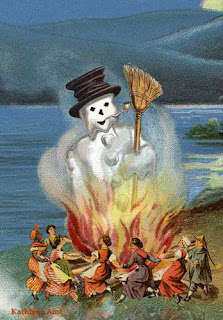 Shades of Salem, even though no one was actually burned at the stake, today is the day to celebrate Snowman Burning Day… It appears that this is an American and Swiss tradition first celebrated March 1971. Supposed to mark the end of winter and the start of spring… Whatever happened to the groundhog? And since when can someone put a match to snow?

He said, She said, they said, in whispers, in hallways, in confessionals, over dinner, in the garden... the topic of conversation, Annulment. Henry wants out of his marriage to Catherine of Aragon. It is a game of illicit chess, and The Tudors, in this episode, getting rid of his wife is the foremost theme and plot. Henry wants Anne... Henry wants his way.

My take on the Hasselback potatoes last night... Yukon Gold - nice and moist, Red Bliss - a wee bit dry. Both good, and here I just thought a potato was a potato was a potato. And when I learned to make Hasselback potatoes about 40 years ago, no-one ever told me that those fan cut potatoes baked in bacon drippings were named after David Hassel... sorry guess that's Hasselback and not Hasselhoff. Guess I have to try the many varieties of potatoes now available, just to compare.

Be healthy, and enjoy.