This morning I crossed the Provincial line from Saskatchewan to Alberta on my Schwinn 150. After my 20.5 miles, I am located on The Trans-Canada Highway, aka The Buffalo Trail, 11.7 miles into Alberta. I am now about 282 miles from my next Interlake address goal and another 538 miles from my final Seattle destination.

The Google roadside has not changed much from Saskatchewan… except there does appear to be some rolling hills in the distance.

We’re supposed to get a lot of rain, according to the weather people in the next couple of days. There’s a rain storm west and south of Tampa, in the Gulf of Mexico . People, we are now into Day 5 of our rainy season. It rains in Florida in the summer. We have thunder storms. It gets wet. My only words of advice – Don’t drive through what looks like a big puddle, and keep a change of clothes in your vehicle. Motorcyclists and bikers, well, be prepared to get wet. And how apropos that I just mailed in our flood insurance renewal…

And coincidently today is Environment Day. The effort is to raise awareness of the importance of respecting the environment. Well it is wet, and green, and wet… And did I say wet?

Last night’s movie was the 1976 film The Last Tycoon. A few of the actors included Robert De Niro, Robert Mitchum, Tony Curtis, Jeanne Moreau, Jack Nicholson, et al. This film is based on F. Scott Fitzgerald’s last unfinished work. How coincidental that that The Great Gatsby is currently the theatre fare 37 years later. 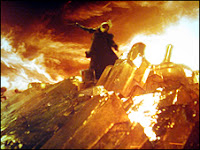 The last part of my morning Trek movie, Harry Potter and The Half-Blood Prince, revealed the new word Horcrux. This becomes the theme of the plots for Harry and Company in the remaining films, obviously. I’m obviously reasoning that J.K. Rowling created the word, but I wonder? Also I was wondering in the filming of the underground lake if there may be some derivation of similarities of Dumbledore to Moses and the Red Sea, and the Gollum-like creatures that come out of the lake.

The interior top of Double Entendre afghan has been completed. It now measures approximate 48”wide and 60” long. The first border has been attached and the hdcs have begun. Work continues on the border for our Astro-Physics quilt and wall hanging. We are currently designing a new take on the corners. Follow our progress on Quilts SB.

Be healthy and enjoy. Time to take The Pack out before the sky opens up.