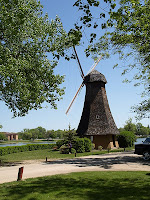 I like riding my Schwinn 150. I like the approximate hour plus time that I have to myself to completely remove myself from everything but my cycle and whatever movie or serial I have chosen to watch. And on the near-desolate roads of Manitoba it certainly is a good possibility.

I am still travelling west on the Trans-Canada Highway and I am just east of Portage la Prairie. This city in Manitoba, of a population of about 13,000, is just about halfway between the borders of Ontario on the east and Saskatchewan on the west. It is also on the Assiniboine River.

I also decided to graph my 20 Interlake address goals as they each relate to my overall mileage.  The blue bars represent the direct mileage from my home in Tampa on Interlake Drive to the corresponding Interlake goal on my Trek throughout the United States and Canada.  The red line is the total number of miles I have completed in my overall Trek and can be correlated to a total at each of the individual Interlake address goals. 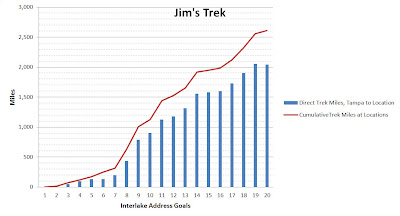 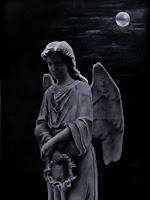 This morning’s viewing pleasure is The Stone Angel, a 2007 Canadian film based on the 1964 novel by Margaret Laurence. The plot line and story of The Stone Angel is very similar to the 1985 movie The Trip to Bountiful which is an adaptation of Horton Foote’s 1953 television play. I am always amazed how theme, plots and stories are repeated through the literature, and through the vehicle of radio, television, and film. And Ellen Burstyn, who played the lead character, Hagar Shipley in The Stone Angel also starred in the stage production of The Trip to Bountiful. 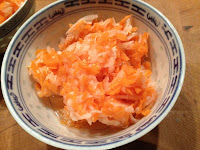 Last night's supper - Montreal Garlic Spareribs and Sesame Daikon Carrot Salad. Both easy recipes to prepare but the total process takes about two hours. From my recollection, Montreal Garlic Spareribs are only available in Montreal. I have not been able to find any the the Tampa Bay area in all the years that I have lived here. Very, very simple recipe - pork riblets in simmering water, drained, mixture of brown sugar, water, garlic, dry mustard, and soya sauce added. All the best, and definitely finger lickin' good - lécher les doigts bien. 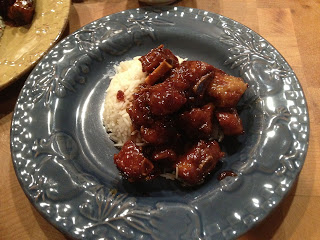